<Back to News
K. Smith School opens the door to Telemundo 48


It was a typical Wednesday at K. Smith â our weekly Parent Pride meeting, engaging projects and lessons, and a faculty meeting for teachers to end the day. Typical? Not so fast. On this Wednesday, before the bell even rang to start the school day, we had already participated in a live two-hour broadcast across the Bay Area.
It was 4:00 am and Mr. Ahumada, our dedicated custodian opened the gates of the quiet and dark campus. The Telemundo news truck pulled on campus and began setting up for the live broadcast, while we brewed the coffee. Slowly others began to trickle on to campus. First the Telemundo reporter Lucrecia Borchartdt and her producer, and then a few tired-eyed staff and students. We gathered in the center of the campus among the murals and cherry blossoms. 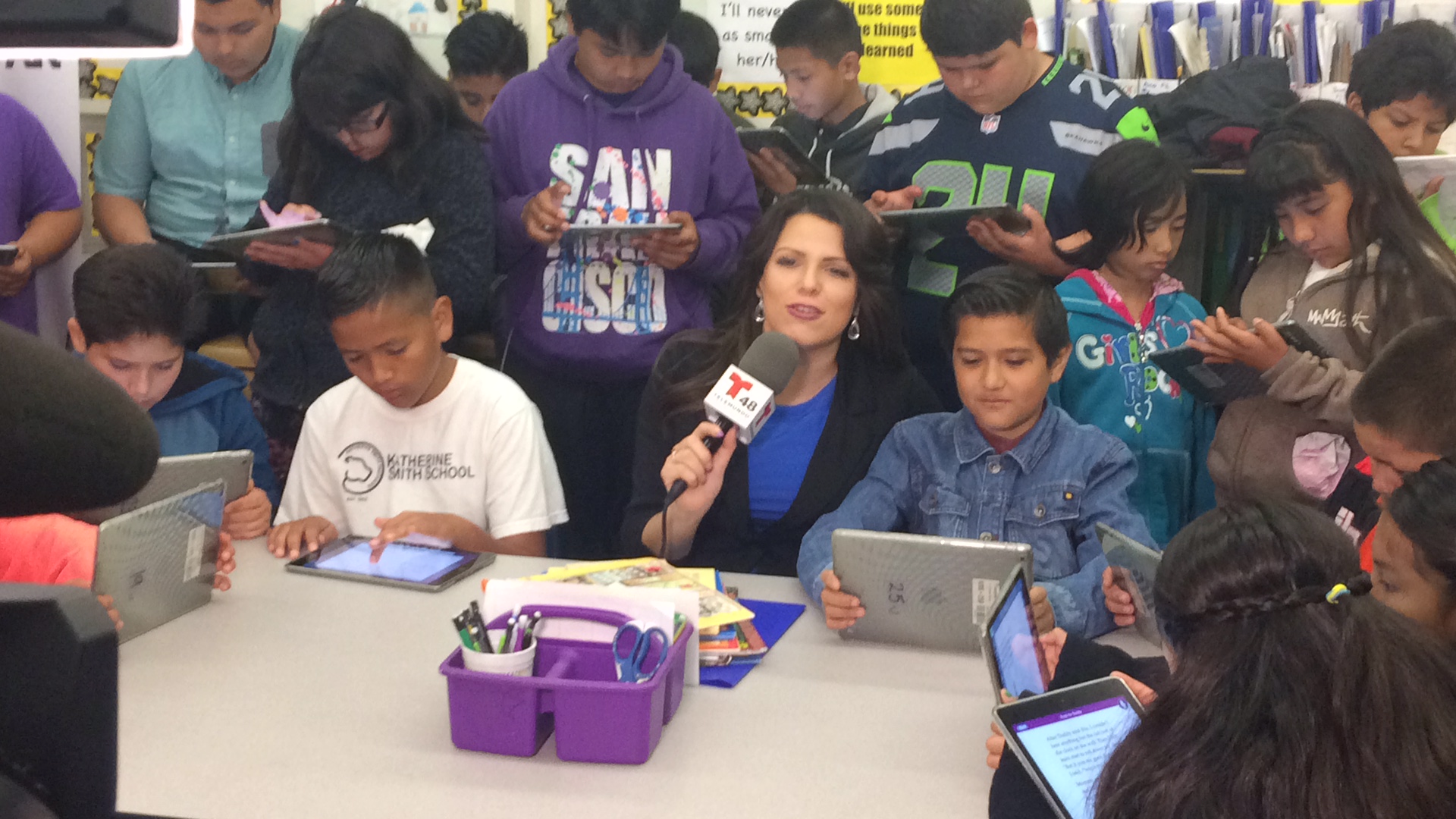 At 5:03, the bright lights went on and the camera went live on air. Five students stood behind the reporter as she welcomed the viewers to K. Smith School - their feature for this week's "Telemundo en tu Escuela" - Telemundo at your school."
Next up, the producer told us that NBC 11, their sister station, wanted to do a crossover interview. More and more students, parents, and staff arrived, and we reassembled in a classroom. "Three, two, one" and with a point of the finger by the producer, the lights shone brightly in our eyes, and the cheery reporter began. "We're here with Aaron Brengard at Katherine Smith and recently you were honored with a national award. Tell us about it." An abbreviated version of our incredible journey to becoming a Partnership for 21st Century Skills National Exemplar School was explained including our commitment to preparing students for this ever-changing world, the focus on needed college and career skills, and a tireless belief in what our students can and will achieve.
A pattern emerged as the ever-growing numbers of K. Smith families arrived. Then every ten minutes or so the show went live again featuring another part of the story or an update on the local weather. Each time staff, students, and parents were moved in and out of rooms and assembled into the background of the shot. For each feature, staff or students were selected for interviews. Christina, a second grader, bundled in her warm jacket and fluffy scarf did the weather, and Jose and Oscar, sixth graders, shared what they loved about our school. They were joined by Jose-Sebastian, Marco, as well as three teachers â Ms. Gonzalez, Mr. Hernandez, and Ms. Peralta. The reinvention story of K. Smith, project-based learning, technology integration, and the fitness room were featured. Each time the staff and students spoke with pose and clarity. "I was a little nervous, but it was easy to talk about our school," shared Jose. 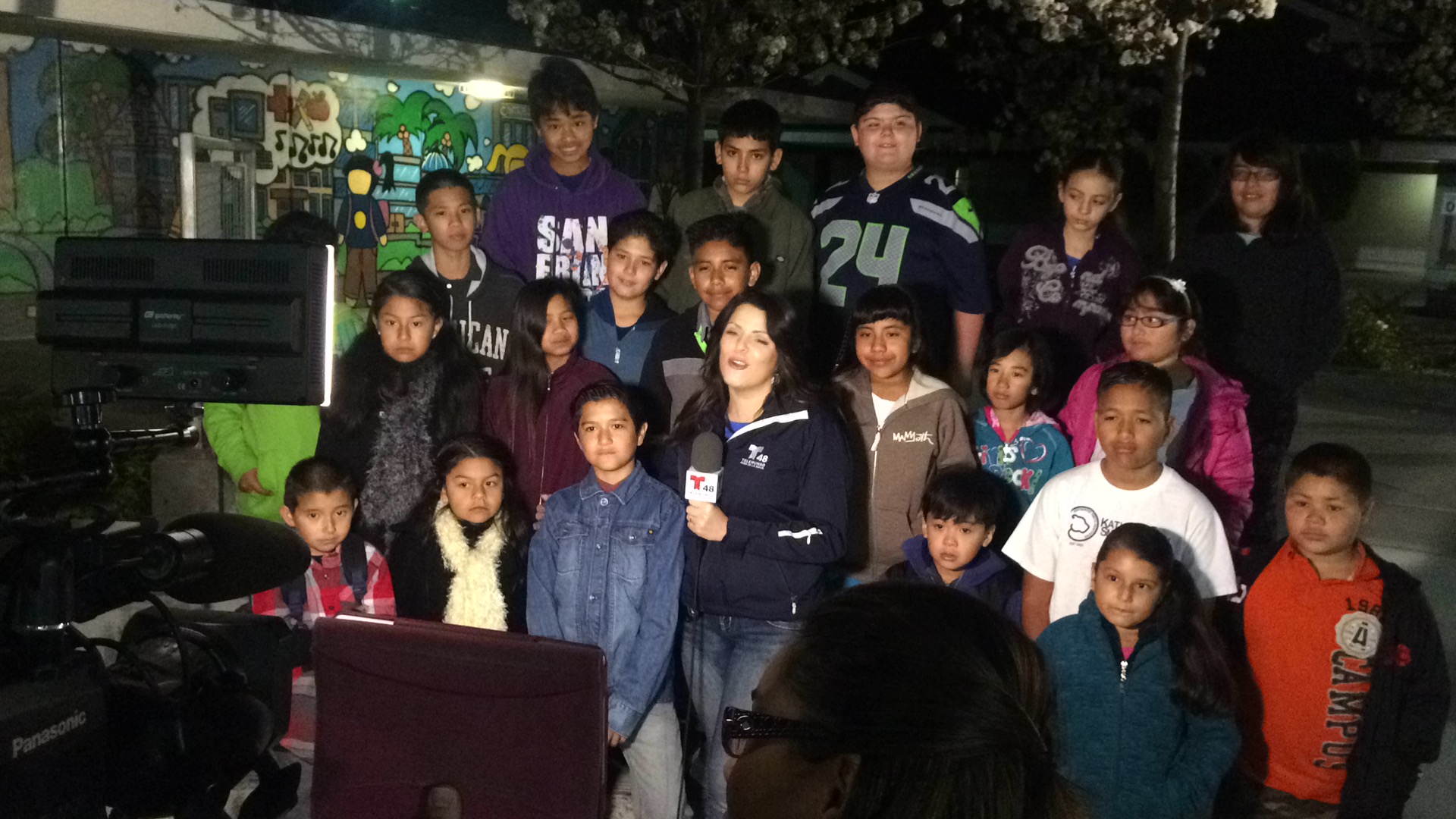 Just before 7:00 a.m. with the sun on the horizon, the camera panned across the quad area with the now large crowd cheering and waving good-bye to the viewers. The lights flicked off and it was a wrap. The broadcast ended with an overwhelming feeling of joy. We were proud to have our story shared. And there is a reason we are getting these opportunities â the work we are doing is special and for everyone who comes on this campus, it's undeniable. "You guys have a special energy," remarked on of our guests.
To no surprise, our day did carry on typically. Parents assembled for the Parent Pride Weekly meeting, students progressed through their projects, teachers met and sifted through literacy data, and we even hosted a Parent University night event. The surprise? The five students who stood behind our Telemundo reporter for the live shot at 5:03 a.m., also sat in the front row of our night class ready to learn. Now, that's dedication.
Check out parts of the broadcast online at telemundoareadelabahia.com - Search for " Katherine Smith" to see.